Fall in Jackson Hole is an exciting time of year. Not only do we get great photos with the ever-changing weather patterns, but we also start to see more and more wildlife preparing for winter. 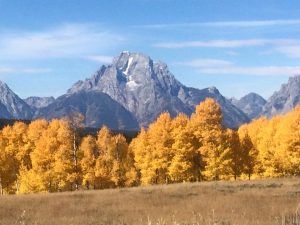 Fall in Jackson Hole is pretty short. Our leaves change in a matter of weeks and if you are lucky enough to time it well, you will get a great variety of colors combined with snow-capped mountains and blue-bird days. The population of the valley also decreases and the likelihood of getting great shots with fewer people is higher.

Fall in this area is also mating season for several animals. During this time of year, you can hear several elk attempting to attract females with an extremely distinct call.  You will also see them moving down the valley towards the Elk Refuge, preparing for the long winter. 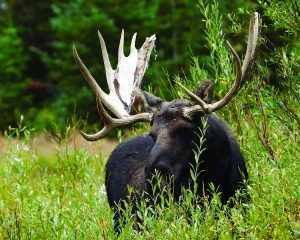 This time of year, you can also see several large bull moose wading in the streams and marking their territory, hoping to attract some females with their large waddles and scent. Both Fish Creek and Fall Creek out in Wilson are prime spots for moose, due to the large collection of willow bushes that line the area.

You will see the last of grizzly bears and black bears, eating as much as they can to prepare for hibernation. Canadian Geese fly past us on the way down south, and you will see flocks of them hanging out in open fields and marshlands. Furthermore, all sorts of small birds and little creatures can be seen preparing for the long winter, gathering anything in their sight to store. 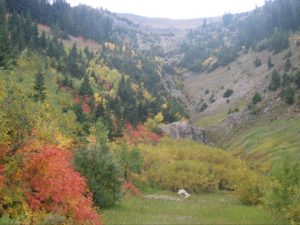 Fall in Jackson Hole also means colder nights and shorter days. During this time of year, we suggest that you prepare for anything and pack plenty of layers for our outdoor excursions. Our temperatures can drop into the low 20s at night and hover around 50 during the day. Occasionally, we will get a great warm Fall that boasts high 60-degree weather!